I am a Microsoft guy. Windows, .NET, SharePoint, PCs, etc. have been my tools for as long as I could type. The newest paradigm to come my way has been Windows Phone 7. I love it. Where iPhones are toys, my WP7 has been a trusty tool keeping me productive and indulged. Sure the app support isn't there yet. Sure, it's still in its first generation (although 7.5 is awesome). Sure Microsoft has a long way to go before it's respected in the mobile world. But I love it. I bought my Samsung Focus the day WP7 launched, and despite the few inevitable bumps in the new technology road, haven't looked back.

Then, last Saturday night at my birthday party, I took my phone out of my pocket, and saw a weird error message. Rebooting didn't help. Since it was late in the evening, and I was in no state to troubleshoot my phone, I turned it off and went back to the party. Then the next morning, I turned it on, and was greeted with the same message. Here's how it reads:

Your storage card has changed, is damaged, or is non-compliant.

To fix this, turn off your phone and either remove the storage card or replace it with a new compliant card. Then you'll need to reset your phone to the original factory settings.

To reset your phone, refer to the owner's manual.

There are two buttons at the bottom: "Emergency" which gets you to a phone keypad, and "Turn Off" which does just that. I could tell the phone was certainly in a wonky state, since that button would occasionally rotate slightly when I pressed it. If locked and then unlocked, the factory lock screen was visible. So the phone was on, just not really operational. 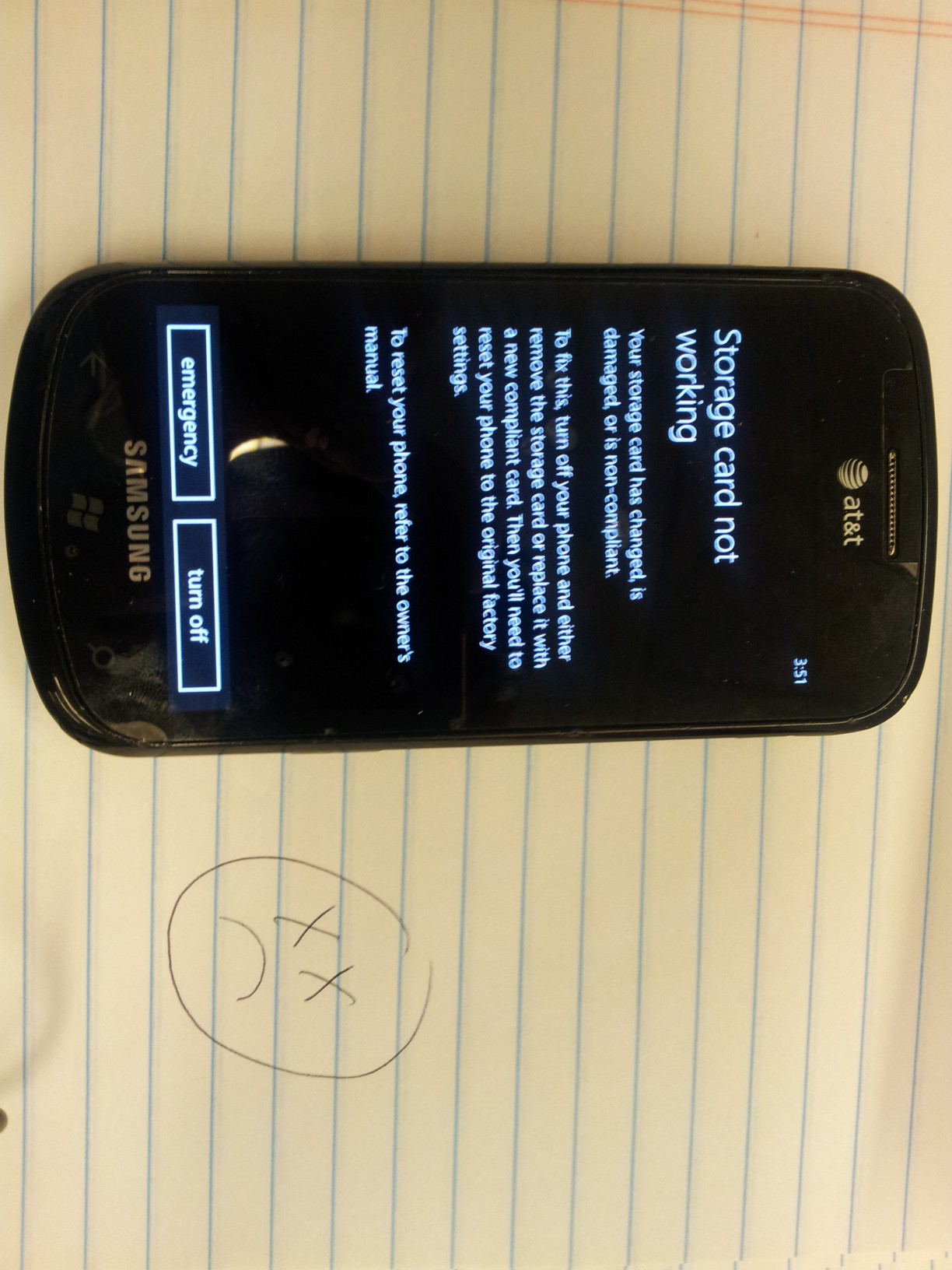 Also, if I left it on in this state, it would get pretty hot. Not quite burning, but certainly hotter than any phone I've ever had. This never happened during normal usage.

The other thing to mention is that, as a Focus owner, I had the ability to shove an additional memory card (Kingston 16GB class 4 microSD) in there. My initial thought was that it freaked out, was jarred lose during my party, or got wet somehow or something; typical phone hardware failures. After all kinds of rebooting, removing and replacing of the card and battery, and even some desperate old-skool Nintendo cartridge blowing, I kept getting the same error.

The drama with WP7 and the Focus is that the phone treats the card as an extension of the hard drive, and forever binds it to the internal memory. So it's a good bet that if your card barfs, your entire phone could be hosed. Make sure to keep your SkyDrive properly backing up your contacts, pictures, OneNote and other Office docs, etc.

Everything I read on the Internet about this problem ended up with the person having to get a new phone. But after my experience with my iPhone and Apple(doesn't)Care, I bought the most expensive insurance I could when I got my new WP7. After three days without a phone, and two trips to the AT&T store (long story; customer service fails all around), I was able to get a new Samsung Focus S for the cost of an insurance claim (which was about $50). I wasn't due for an upgrade or anything, but either I charmed the lady behind the counter enough, or she felt sorry enough for me. Either way, I walked away with a larger, lighter, faster, (4G-ish! 1.4 GHz proc!) phone that even has a front-facing camera! Win!

I also noticed that none of the texts or voice mails I received during my stint in the dark ages off the grid came through, so look out for that. Otherwise, sure it sucks having lost some pictures and text message threads, etc, but I still feel like I came out way ahead. I look forward to the next generation of Windows Phone 7 devices, and hopefully a new generation of users as well!